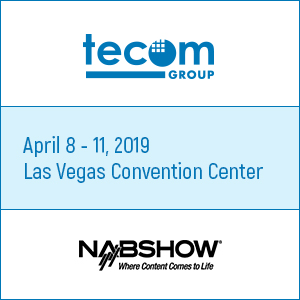 NAB Show annually convenes hundreds of professionals in broadcasting, post-production, digital technologies, artificial intelligence, virtual reality, app development, streaming and other areas exhibiting their cutting edge solutions and technologies developed to make our life more advanced and easier. This year 1700+ companies from up to 160 countries will be a part of this industries’ biggest event. Tecom Group is also heading there to meet new clients, build strategic partnership and introduce the most recent releases of proprietary software solutions to the global market.

NAB Show 2019 marks the debut of an upgraded version of Tecom’s proprietary file-based quality control solution. The system has a wide range of tests with configurable workflow templates for automated verification of media files, video, audio and metadata. The defected fragments can be immediately watched both in simple, descriptive reports and a built-in media player. In addition, the system can perform an automated analysis and normalization of audio levels in accordance with EBU R 128. In August 2018 Tecom’s quality control system was added with tests for VOD content verification.

With a newest release Tecom’s file-based QC system has been enhanced with major updates including a web-based video player to playback defected fragments in browser without any need to install the player thus making it compliant with any OS, API to work with third-party systems and a set of new formats.

If you want to have a look at the newest system features or see potential in further product-related cooperation send an email to orekhova.a@tecomgroup.ru

An updated product line of two loudness control and normalization solutions: LA Playout and LA Production will also be available for demonstration. LA Playout now integrates with Imagine Communications’ D-Series playout automation system, in addition to the ADC playout automation. The enhanced version of LA Production incorporates various new features, including the ability to work as a Windows service.

This latest version also utilizes the original adaptive Level Magic™ algorithm that allows broadcasters to comply with all current international loudness standards while preserving a high audio quality. The system normalizes files with a multi-stage design and as a result the audio is compliant with a selected standard but free of any unwanted artefacts such as pumping, breathing or distortion. The application works in automatic and manual modes. In auto mode, files from a watch folder are analyzed and normalized if necessary. A frame-accurate video player and audio channel mapping option can be named among other useful features of LA Production.

See you at the show!