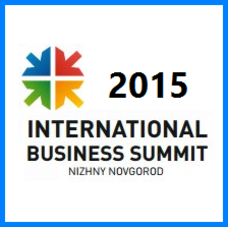 Nizhny Novgorod, Russia — the 4th International Business Summit 2015 was held in All-Russian CJSC Nizhegorodskaya Yarmarka. “Russia: Together into the Future!” was the key theme of the Business Summit this year while the main purpose the organizers pursued was to create a positive image of Russia as a business partner for the international business community.

Alexander Kabanov, Tecom Group’s General Manager, took an active part in the special workshop “Russia and the East: Going Forward Together” with his report on “Software development and implementation projects for broadcasting and telecommunication companies”. The main goal of the workshop was to establish new business contacts, develop and strengthen collaboration with the existing eastern partners. The interests of this region were represented by Al-mahmoud Saoud, Ambassador of the State of Qatar in RF and Muhsin Ismieal Shafiq, Ambassador of Republic of Iraq in RF.

On September 10, 2015 International Media Forum gathered experts, specialists and delegates from authorities, including Ministry of Communications and IT, in order to take part in the round table session “Media Measurements in Advertising”. The event was attended by Sergey Kuchin, the Regional Minister for Communications, Vladimir Gubernatorov, Advisor to the President CCI of Russia, Sergey Smirnov, Head of Antimonopoly Service of Russia in Nizhny Novgorod region, Natalia Alhimovich, Head of Roskomnadzor Office for the Volga Federal District, Sergey Piskarev, Chairman of the Committee on entrepreneurship in the field of advertising in the Chamber of Commerce and Industry of the Russian Federation, Olga Ermolaeva, Head of the Media Committee, Ksenia Achkasova, TV Audience Research Director at TNS Russia, etc . Anatoly Zubashev, Tecom Group’s Vice president, Broadcasting, did a presentation on the “Problems of media monitoring and regulation of interactive advertising in InternetTV”. In his speech, Anatoly Zubashev touched upon the issue of nontransparency of the mechanisms used for media measurements and called into question accuracy of the measurement methods applied for recently appeared new media channels (Internet, SmartTV, OTT etc). Tecom Group’s Vice president also emphasized problematic sides of the monitoring process and drew the audience’s attention to Qligent solution that allows OTT and IPTV services monitoring. It is worth a mention, that the report triggered interest among the attendees.

International Business Summit is an annual event hosted by Nizhegorodskaya Yarmarka with the support of the Government of Russia. Business summit has already gained popularity among Russian and foreign business communities which can be proved with the impressive number of attendees this year - 11 000 attendees, among them - delegates from 44 countries and 39 Russian regions. The results of the business summit are as follows: 24 agreements are expected to be signed amounting to 62 billion rubles.